skip to main | skip to sidebar

I'm planning to revisit PNG early next year.
I haven't been to PNG since last May.
I'm looking forward to visit PNG very much.
I will try diving next time.
投稿者 mangi madang 時刻: 2:16 0 件のコメント:

I'm so sorry to upload new information late.
I would like to guide Madang Town.
Madang Town is the main town of Madang Province.
The land area of Madang Province is almost twice of Kumamoto Pref. and it located in North-
west from Port Moresby, the capital city of Papua New Guinea.
Madang Town is basically not so big area.
At first I would like to introduce the sightseeing spot.
The machine-gun beach is the place of recreation for Madang people. Lots of people, not only
children but also adult enjoy swimming here. The name of Machine-gun beach come from that
there were machine-guns in this are in time of World War 2. Those machine-gun belong to
Japanese army. 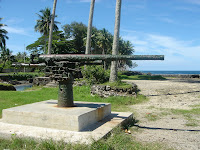 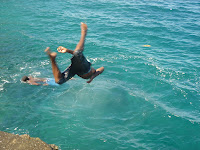 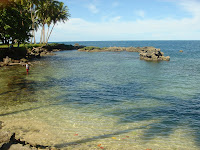 And then Coast Watchers Light House is only 10 minutes by walk from Machine-gun beach.
It is war memorial established by Australia. This is the most famous symbol of Madang. 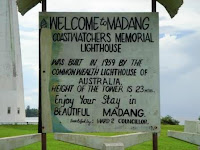 Madang Provincial Museum is the place of culture centre. This museum was established in 1984,
and exhibition of traditional and cultural collection. There are carvings, stone tools, or wooden
statues and so on. You can understand the culture of Madang and even Sepik. 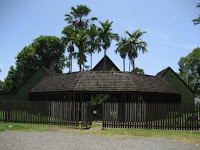 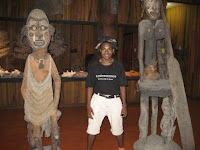 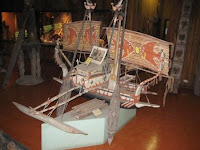 And I would like to introduce about The Main Town Market. The market is the place of food for
daily life. Many farmers sell their food products here with cheap price. You can find lots of
vegetables and tropical fruits. Also some of artifact are sold here too. Those are for souvenir. 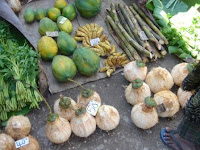 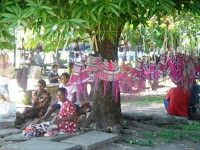 Singsing is traditional dance in Papua New Guinea(PNG).
Singsing, the word come from "sing" in English.

There are 800 or more language in PNG. It means that there are 800 or more culture in PNG.
Actually each village has their own traditional dance and songs.
When they play Singsing, they wear their original traditional dress with
accessaries which made of shell, pig tasks, dog teeth, feather of Bird of Paradise.
PNG people play Singsing when they have something cerebrating as
harvest, or blide, or initiation for kids.
Also they dance Singsing when they join Cultural show.
Their Cultural shows are held once a year in each places whole of country.
Lots of villager come together and compete their dance.
If they perform well, they can get honoralbe prise.

They think getting prise is greate statas of their own culture.
So they always practice and blush up their dance and singing.
The Goroka Show in Eastern Highland province,
or Hagen Show in Western Highland province,
and also Hiri Moare in Port Meresby in National Capital District
are so famous cultural shows.
More information for cultural show, go to website of PNG Tourism Promotion Authority. 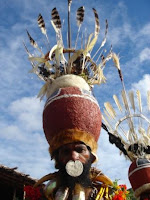 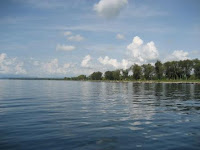 I was in Madang in Papua New Guinea.
It's so beautiful place wher is coral sea, and untouched natural
reinforest with various kind

of fauna and flora.

In the sea, beautiful coral, lots of kind of toropical fishes. 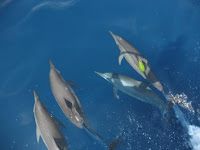 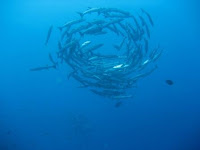 diving spot around the madang

and when you are lucky you meet a Hammer head. Unforutnetely I've never see Hammer.

Also I have to say Madang Lagoon is basically good condition. Good visibility,

the currrent is calm basically.
My favorite season is 1st week in March. It's still wet season but no rain every year in this
term. So the condition is the best in a year.
Diving magazene pick up Madang sometimes, and famous photographers publish photo books.
Enajoy Madang Lagoon with books at first please.
投稿者 mangi madang 時刻: 20:54 3 件のコメント:

I would like to starat guidance to Papua New Guinea(PNG).

I stayed in PNG for 2 years by any chance.

Also I worked for tourism in PNG.

So I would like to promote PNG tourism more.

PNG is located in South Pcific. Neighbour conuntry are Solomon Islands to the east,

Indonesia to the west, Australia to teh south, and Micronesia and Palau to the north.

PNG is consist of over 1200 large and small islands.

Main island is New Guinea Island. The 2nd largest island in the world.

*the largest island is Greenland.

Half of New Guinea Island belong to Indonesia.

The climate is toropical, average tempalature is almost 32℃ thorugh the year.

However you feel so hot in daytime becaus of the sun shinning.

There are 2 seasons in a year, wet season and dry season.

Wet season is between Novmber to June or July. August to Octber is dry season.

Season is little bit different according to the region.

Basically PNG is easy to stay because of its climate.

It's a great job they made.

I want to celabrate their winning.

This is my first blog in my life.

However now I start by any chance. I would like to keep going writing as possible as I can,

This is a good opotunity to think and experess my ideas.

on WBC. This is the first winning to USA in Japanese baseball history.

mangi madang
I had been in Papua New Guinea from 2006 to 2008 for 2 years. I spent most of time in Madang Province where is beautiful place with coral sea and untouched rainforest with various species of fauna and flower. I would liet to speak much about beautiful Madang and Papua New Guinea.